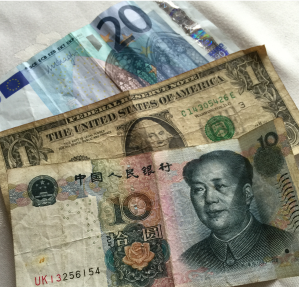 On August 11st, China Central Bank, the People’s Bank of China (PBC) declared to downturn the central parity rate of Renminbi (RMB) against foreign currencies, then the exchange rate of RMB decreased 4.4％ from August 11st to August 14th. World market was shocked by this devaluation. Chinese Austrian economist Dr. Zhu Haijiu was interviewed by Chinese media about why Renminbi is in devaluation.

The price of a country’s currency should be the same whether you use the domestic or foreign commodity to measure it or not. So the large devaluation of exchange rate of RMB shows the earlier devaluation of it in Chinese domestic markets.

Journalist: After PBC decided to adjust the central parity rate of RMB on August 11st, the exchange rate of RMB has dropped several points in a day. How do you see the drop of RMB’s exchange rate?

Zhu Haijiu: The drop of the exchange rate is the inevitable result from the former inflation, which also represents the Chinese economy is shifting into the period of crisis. On one hand, inflation advanced labour cost, which makes investment unprofitable; on another hand, the high asset price caused by inflation cannot maintain itself, which is on the ways of dropping. This prompts capital to outflow, which makes the drop of the valuation of domestic currency and makes the exchange rate depreciation become inevitable.

“Inflation” and “currency stabilization” cannot be got at the same time

It’s very easy to understand, the more goods an economy has, the more it will devalue, so as the same situation as in currency supply.

Journalist: The opinions as to why this devaluation of RMB happens is that China is facing both economic downturn and decline of foreign exchange reserve (for example, report from PBC today says in this July, funds outstanding for foreign exchange declined for ¥308 billion), but meanwhile the supply of basic currency will still keeping growing, which makes the devaluation of RMB inevitable. What do you think about this opinion?

Zhu Haijiu: According to economic theories, if the foreign exchange reserve declines, the supply of basic currency should also decline. But in the past year, on the contrary, the supply of basic currency was increasing, which meant that credit expansion didn’t stop but was growing stronger if we consider this offset the decline of basic currency caused by the decline of foreign exchange currency. During the past, I’m afraid that the overvaluation of RMB was kept artificially. So the sharp fall in the value of RMB is both the error correction for the overvaluation and the error correction for exchange maintained artificially.

“Inflation” and “currency stabilization” cannot coexist at the same time, so the devaluation of RMV is an unavoidable result from inflation. It’s very easy for understanding, the more goods it has, the more it will devalue, so as the same situation as in currency supply. The inflation has resulted in excess capacity in the real economy: productions cannot find buyers, the asset prices of real estate and stock raised and then dropped. Neither could currency avoid that situation. The drop of valuation of RMB happened just after the stock crash last month. The currencies of the countries that heavily rely on product factors exporting, such as Australia Dollar, Brazilian real and Russian ruble all have a large fall, so we can say RMB has held on firmly for a while.

For a period of time, PBC tried to maintain the price of assets by issuing more currency to avoid capital outflow. But this devaluation of RMB proves this way doesn’t work, which means we cannot avoid economic downturn by using currency. Sooner or later market rules will function which China Central Bank PBC has no choice but to follow. We can say this devaluation of RMB is “the winning of market but the failure of central bank ”. Economic crisis and the devaluation of currency are the inescapable results both from fiat money system and the currency manipulation from central bank.

Fiat money is unstable, which has the tendency of collapsing by itself. The increase of fiat money will surely accumulate debt, and debt should always be returned as obligation. When government tries to issue new fiat money to return the former debt, the devaluation of fiat money happens. If a government issues huge amounts of money, so the people in that country only need to use these money to buy foreign goods. You don’t need to work hard then you can live in a good life by those money. Will a good life suddenly fall into you lap? If it’s possible, the richest country on earth may be Zimbabwe. In the situation of inflation, the devaluation of currency must be discovered by market, which makes it impossible for government to cover and forcibly maintain the value of the domestic currency. In the 1990s, British government was beaten by George Soros is a good case for that.

Currency wars are bad for economy

The devaluation of currency artificially only increases the assurance of money and increases the price, not increasing the real wealth.

Zhu Haijiu: As what has been said above, the devaluation of RMB was caused by market rules, not the currency way that should de faced. Any idea that wants to use currency wars to improve economic situation should be abandoned. Fight for currency wars will disturb the process of market, which is harmful for economy. What we need to worry about is not the devaluation of currency, but to not let it devaluate.

The named currency wars cannot increase the wealth of a country. The thought that if a country has more foreign currency, then it will be richer is an idea of  the outdated mercantilism. The chief economist of Industrial Bank Co., Lu Zhengwei said after the devaluation of RMB, China’s economic growth can easily achieve 7.5%. It seems that economic situation will become better if the currency devaluates. This point of view is untenable. The devaluation of currency artificially only increases the issuance of money and increases the price, not the real wealth. Of course, if the devaluation is conforming the market rules, things will be different.

Currency exchange rage is just a rate of exchange, which cannot presents the change of wealth. If you buy more products in foreign countries, more currency will flow to these places, then the price increases; in the condition of free trade, this money will flow back to your goods, because your products have become cheaper. The creation of wealth doesn’t rely on central bank, but on the free movement of commodities, currency and personnel. Over issue of currency or manipulating money artificially all are harmful to the creation of wealth. So in this perspective, central bank is the crime culprit which disrupts economy. It is very hard to achieve the marketization of exchange rate if central bank exits. Of course, what PBC is doing this time is conforming to the marker process, which is advisable.

The change of currency rate is a signal of economy, like the temperature fluctuation of thermometer is the signal of temperature. The way you put the thermometer into water and reduce the temperature artificially in water cannot reduce and present the real atmospheric temperature. Likewise, manipulating currency artificially and starting currency wars will never improve economic situation and make the pricing signal become a failure and let economy get more troubles. The entire world should give up currency wars and make free market and free trade their goals.

Translated by William Hongsong Wang. This translation is cooperated with TBI Translation.

Dr. Zhu Haijiu is the professor of School of Economics of Zhejiang Gongshang University and the researcher from the Shalom Institute.

If you like this article, please scan the QR code below on Alipay for sponsoring the translator: